Almost every day, TV shows, movies, and news reporters confuse the terms robbery and burglary. Most people use the terms interchangeably, but they are not the same crimes. Although both of these crimes involve theft, there are very clear and simple differences between the two. Depending on whether it is robbery or burglary, there are different penalties and approaches to defend them.

Before we can differentiate between burglary and robbery, we need to define theft. Theft happens when there is any taking of property without permission. The perpetrator also needs to plan to take the property permanently. The property can be money or any other physical object of value. 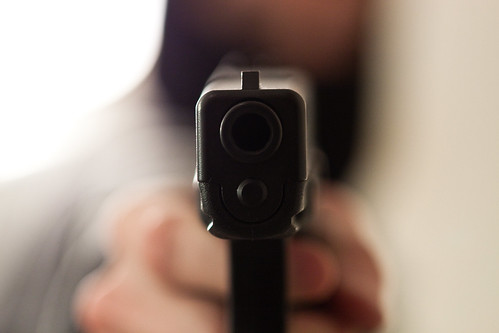 Robbery involves a person taking property from another by using physical force or threatening the victim. For a robbery to take place, the victim needs to be at the scene. It isn’t a robbery if somebody just takes property from a person without the victim noticing. A robber must use force, like hitting or punching, or intimidate in order for the act to be considered robbery. A good example of robbery is when a perpetrator points a gun at a cashier demanding him to empty the register.

A burglary occurs when a person enters a building without permission in order to commit a crime. The building can be a home or a business, and the victim doesn’t have to be present. A burglary takes place whether the theft transpires or not. The only thing that’s necessary for a burglary is to enter the structure without authorization. Although most burglaries involve breaking and entering, the method of entry into the building is not important, as long as it occurs without permission.

Because robberies involve physical force or threatening, they are usually a felony in Colorado. Some of the considerations that go into determining the severity of the charge are previous criminal history and type of weapon used. Since robberies are serious crimes, the value of the items taken is not important when determining the punishment. Another thing to take into account is aggravated robbery. Aggravated robbery occurs when the robber knowingly puts the other person in danger, whether with the intention to kill or to injure. It is also aggravated robbery if the accused person uses a deadly weapon to threaten the victim.

There are three different types of burglary charges in Colorado. Third Degree burglary occurs when a person tries to break into a locked container to commit a theft. The locked container can be a safe or vault, and it can be located on a home or a business. Second Degree burglary happens when a person enters any building to commit any crime. It is a Class Four felony on a business, and a Class Three felony on a home. First Degree burglary involves threatening a person and is considered a Class Three felony. It can carry up to twelve years in prison.

It is important to know how to differentiate between robbery and burglary. Both are very serious crimes, but there are differences in the definition and in the penalties that they carry.